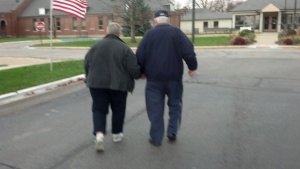 He was the Chief.

He served his community as a police officer for 37 years.

He served his country in Korea.

He was always in charge.  Admired and loved by all

He was known everywhere he went.  “Hi Chief!”, neighbors would say.

He had such a strong will he refused to demean his men.  He’d resign first.  And he did.

He held his head up, above it all.  Loyalty.  The most important thing in the world.

He retired after 37 years, the same number of years his daughter will have worked.

He was a dad

He raised three successful children.  Was grandfather of six.

He drove his squad car to the field to watch them play ball.

He walked her down the aisle looking serious, but with a quiet smile on his face

He didn’t always show his emotions, but his pride often beamed through

His was a husband

Two Italian Americans coming together for over 50 years of marriage

Cooking with love.  Looking to him for guidance, comfort, direction.

His final years didn’t represent who he was.

He forgot things.  He wasn’t the same.

But, his kind disposition remained in tact.  The nurses loved him.  He was agreeable and even laughed.  Occasionally

Today he is at peace

Today, his brother and his parents are saying, “Hey Chief!  Hey Charlie!  Great to see you!  Welcome home.”

11 thoughts on “Hail to the Chief”

It's not just about my Mom anymore..

trying out a new writing style...

The In's and Out's of Life
EDUCATORS ARE AWAKENERS

“I am not a teacher but an awakener.” — Robert Frost

T is for Titi

A girl with a smile, with stories from her life on 3 continents, to make you smile!

Noticing and celebrating life's moments of any size.

A Time To Write

Thoughts that may take you on a journey...

Living the Life of a Writer

Seeking and rekindling joy...one day at a time

Be Who You are